In homeopathy, the process of medicine preparation usually starts with a primary substance derived from an animal, plant or mineral source. 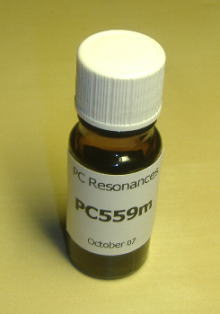 This substance is diluted in alcohol and then goes through a technique known as potentisation, a progressive process of dilution and succussion (shaking with impact) during which any toxic elements are eliminated and the curative potential amplified. The water stores and remembers the information from the crude substance at a subtle level and in higher potencies does not retain a single molecule of the original substance - rather it holds an energetic imprint. The end product is a medicine, which through homeopathic resonance has the potential to stimulate the immune system and restore health.

The technology for making PC Resonances has evolved from the way homeopathic medicines are usually made.

Using the same technology, disease-specific PC Resonances have been prepared for a variety of epidemic diseases, based on an analysis of the totality of the symptoms belonging to each of those diseases.

The revolutionary methodology and resonances used by ARHF were born out of a heartfelt desire by British homeopath Peter Chappell to help the millions of people in Africa who suffer from AIDS.

In 2001, when he first went to Ethiopia there was no effective homeopathic remedy available for HIV/AIDS. It was not renewal and extension of homeopathy that was sought but healing for patients who were often lacking any kind of medical care.

Likewise, the development of trauma resonances was not intended but simply called for when, in Rwanda in 2005, it appeared that AIDS patients were still heavily traumatised from the genocide in 1994 and would only be able to completely heal from their AIDS related symptoms if their Post Traumatic Stress Disorder could also be treated.

The possibility of treating a disease with a specifically designed PC Resonance that matches the disease totality is a further development in homeopathy and combines the advantages of homeopathy (high safety/no side effects) and pharmacology (disease-specific treatment). Thus, in epidemics and collective trauma, few case-taking skills are needed to prescribe and follow up with confidence.

In this new technology, putting information directly into water creates a homeopathic resonance and no substance is ever involved. This means that, similar to high homeopathic potencies, the resonances created using this new approach do not contain a molecule of substance, in contrast to conventional pharmacology.

To make a PC Resonance, a synthesized pattern totality of the disease is imprinted onto water. This crystallized totality is based on the physical and psychological aspects as expressed in the acute and chronic state of the disease, as also on its heritable trans-generational expression.

It works on an informational and energetic level only. There is no physical component to the information imprinted onto the water.

More information on how PC Resonances are made is to be found in the book Homeopathy for Diseases.