Malaria is the main epidemic disease that causes death, disease and underperformance in Africa.

Especially children suffer the consequences. Data on the extent of malaria in Africa vary and are based on estimates.

The figures show conclusively how big the impact of malaria on life in Africa south of the Sahara is:

An effective and sustainable way to treat and prevent malaria would greatly improve the quality of life in Africa. That way is available.

The PC Resonance for Malaria, called PC240m and produced by three European homeopathic pharmacies, has been used in Africa in thousands of cases ever since it was first prepared by Peter Chappell in 2002. This remedy has proven to be effective in treating acute malaria, chronic malaria as well as the long-term effects of malaria, for example, epilepsy or chronic headache occurring after suffering cerebral malaria.

What are the advantages of PC Malaria?

And there is still another huge advantage…

A resonance that heals a contagious disease may also help to build up resistance to that disease.

Together with other preventive measures such as mosquito nets, PC240m can therefore also be used to prevent malaria.

ARHF trains African health workers to use PC Resonances in the treatment and prevention of epidemic diseases and provides African partners with free remedies. Reducing malaria is one of the main goals ARHF has set.

What does malaria mean to a schoolchild?

In recent years ARHF has devoted itself increasingly to the prevention and treatment of malaria, especially in children, because:

We knew from experience that once children were treated with PC Malaria that – despite repeated infection – they would be free of the disease the whole malaria season. Next we have tested the effect of giving children a regular dose of PC Malaria from the start of the malaria season as prevention.

Malaria prevention with PC240m was first tested out in DR Congo in 2009. At the Land of Hope School in Kiliba (South Kivu) 600 children were given regular doses of PC Malaria as prophylaxis. Within a few months the school reported there were no more cases of malaria at the school at all.

In Uvira, just south of Kiliba, PC Malaria was dispensed in the community by a church dispensary. A few months later the local Red Cross Hospital complained that they were seeing 95% less malaria cases and had difficulty paying their nurses, as malaria patient care was the main source of income.

In Mzuzu (Malawi 2012) a nursery that took care of 300 children lost 5 children each year because of malaria. The year that they started giving PC Malaria to all children they did not lose a single child. Based on the reported results one of the ARHF volunteers, Ruthe Schoder-Ehri (nurse and homeopath from the US) started the AFRICA MALARIA PREVENTION PROJECT (AMPP) in Malawi in 2013. ARHF appointed the Amma4Africa Manager in Malawi, Joseph Msumba to manage the project. In the malaria season of 2013/2014 he and his team of volunteers reached more than 6,000 children and adults, and in the season of 2014/2015 more than 27,000. Schools report reduced absenteeism while the director of the local hospital in Chintheche reports reduced hospitalization and reduced deaths from malaria. The results inspired us to make AMPP a priority programme and to roll it out in many more countries as also to do further research into the effectiveness of malaria prevention with PC240m.

A Community Health Worker made PC240m available to all 20,000 people living in and around Chemelil (Kenya). Chemelil used to have up to 3 funerals per week because of malaria. A local clinic confirmed that for more than 6 months, nobody had died from malaria in Chemelil!

In 2014/2015 5,000 Kenyan school children received PC Malaria as prevention. The results are beyond anything we dreamed to be possible. In all participating schools absenteeism went down by 70-80%. Where normally 4-5 children would be absent in each class because of malaria, this was reduced to 0-1. One school decided to check whether the small number that still was reported sick had malaria. What they found out was that these children had typhoid or another sickness, but not malaria. We know that treating malaria with PC240m is effective in 90-100% of the cases. It is good news that prevention with PC240m is similarly effective. These results indicate that AMPP can also significantly reduce the death rate due to malaria and improve the quality of life of all Africans and help Africa prosper.

Besides seeing the outbreak of malaria drastically reduced, we have also witnessed long-term consequences of this. As absenteeism in schools has decreased dramatically as a result, learning performance improved significantly (see chart). Thus children have a healthy start in life with a view to a better future.

In several African countries ARHF works with local partners to collect data from participating schools and clinics and to publish the results. From different schools we have absenteeism rates and the results of final exams of each quarter of the year before they started AMPP and then the year after they started AMPP. The first results came in from Kenya. We found it initially hard to believe those figures. The decrease in absenteeism was so dramatic that it seemed inconceivable. These data were therefore checked by our team on the spot. They are also known in the Ministry of Education, which also controls the exams. Moreover, we get confirmation from other countries like Malawi and DR Congo where comparable results are observed.

In Kenya we have received data from several schools. Without exception positive. On Miwami Primary School for example, around 30% of the 274 children were absent in the year preceding AMPP. Within a few weeks after starting AMPP that figure dropped dramatically to stay low (see the blue line in the graph). As the data have been collected over a period of two years the improvement cannot be attributed to seasonal influences. Moreover, in this part of Kenya malaria is there the whole year and the season plays no role.

What we also expected was that children would perform better in school if they would be absent less and no longer chronically tired from anaemia. The red line in the chart shows the development of school performance. After a year AMPP, pupils on average performed 26% higher on the test conducted by the ministry of education than in the first measurement before AMPP. 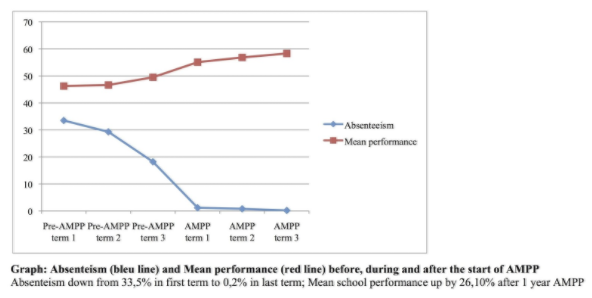 Because we had gathered absenteeism rates on a weekly basis, we could see how quickly the number of absent children reduced. AMPP was started in the 4th week of the 3rd quarter. Starting in week 5 the number of sick children went down rapidly. At the end of the quarter of 11 weeks absence was only 5%. In the following full year absence stabilized at around 1%. 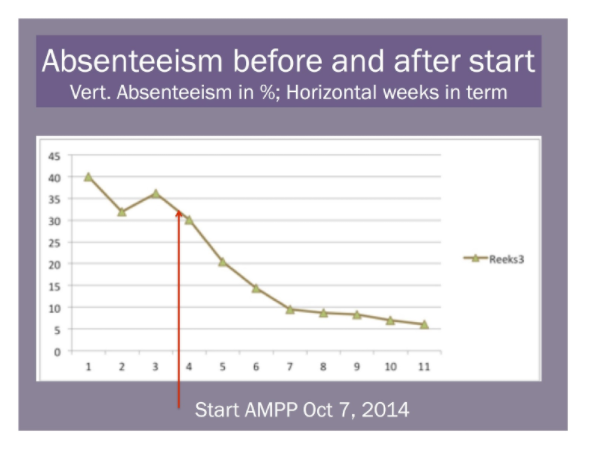 Healthy children performing better in school are also an investment into the future, a future with more welfare and prosperity in Africa.

Rolling out Africa Malaria Prevention Project (AMPP) all over Africa

In 2015, over 100,000 children benefitted from AMPP. Halfway 2016 that number was already almost doubled, an increasing trend we hope to continue. With modest resources this is possible. The important thing is that Africans themselves are committed to implement and further disseminate the project. Our vision is that AMPP itself can only spread widely across Africa when this happens by and for Africans. Begun in 2013 in Malawi, by 2016 AMPP had already spread to countries like DR Congo, Kenya, Tanzania and Nigeria.

What we offer African partner organisations

What we ask from African partner organisations

Our African partners make malaria prevention available in schools and communities for only 10 cents per child. You can support them with your donation.