In 2014, Peter Chappell introduced a sound based program in Kenya called LEAP. The LEAP program uses sound (MP3 files) instead of the dropper bottles used for AMPP (Africa Malaria Prevention Project) and its three steps cover a wider range of conditions.

From several schools where this was introduced, we have full data from before and after LEAP. After analysis of the data the results were as we had hoped:

At LEAP schools, absenteeism has decreased an impressive 80%. Children with behavioural problems have improved and those too shy to answer a question now even ask questions.

Whether caused by birth trauma or cerebral malaria, children with epilepsy have significantly less attacks. As to learning abilities, in the history of the school in the LEAP video (LEAP Kenya 2015 evaluation above), no child ever had a score of 300 out of 500 or higher in the end of term tests. With LEAP the mean performance had gone up in every class, and in each class there were now 3 to 5 children with a score between 300 and 350.

What is very touching is that all the head teachers of LEAP schools we interviewed spontaneously reported that the relationship between children and teachers had improved a lot, so much so that the cane had now become a relic of the past. Just beautiful.

The graph below shows the impact of LEAP on absenteeism and school performance. After a full year of using LEAP at Marega Primary School, absenteeism reduced from an average of 11.8% in the year before LEAP started to just 0.2% during the year LEAP was used in all classes.

By the end of the year, mean school performance measured through state examinations had increased by 26%. These data show that LEAP is literally helping children to have a healthy and bright future. 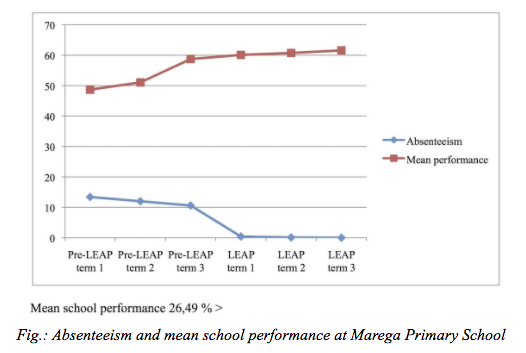